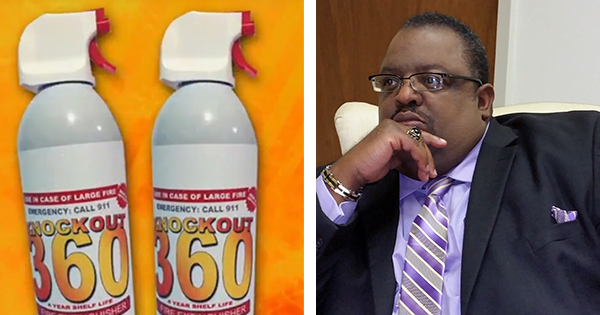 Beverly Hills, CA — Unlike traditional fire extinguishers, the new and improved Knockout 360 Fire Extinguisher can stop small fires without messy cleanups. It contains no toxic chemicals or odors, making it particularly helpful for those with sensitivities. It uses a special technology to remove heat, so the area is immediately cool to the touch.

Knockout 360 works on a variety of fires, including grease, oil, gas and wood fires. It takes the guesswork out of what to use for a specific fire. Knockout 360 is good for up to 12 uses and, unlike other extinguishers, there are no yearly maintenance costs.

One of the best benefits of Knockout 360 is that it is easy to use. Many people feel intimidated by learning how to use a traditional fire extinguisher, and if you wait until an actual fire occurs, you don’t want to be fumbling around and trying to figure it out. Fortunately, Knockout 360 works like any other household spray. Moreover, you do not need to shake the fire extinguisher in order to use it, which shaves precious seconds off response time.

Following the success of the original product, the new and improved Knockout 360 Fire Extinguisher will be promoted via a major DRTV campaign and will be immediately available for purchase on Amazon, eBay, Sears.com and other popular ecommerce sites.

About Lawrence J. Hardge
Lawrence J. Hardge has been an inventor since childhood and holds over 120 intellectual prototypes, as well as numerous patents and trademarks. His portfolio includes assisting other inventors in taking their products to the global marketplace. Hardge is an inventor who loves to give back to his community. When he’s not coming up with his next innovative idea or product, he’s writing and composing music or playing one of his multiple instruments.